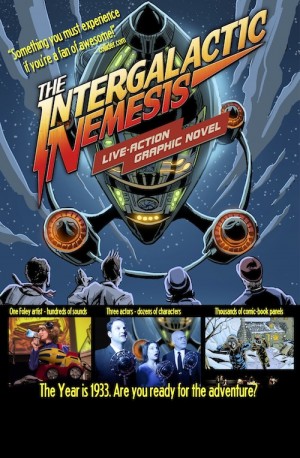 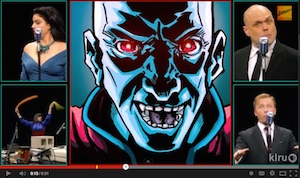 Scroll down for artwork, billing, short and long descriptions, web and brochure copy, press release copy, and quotes from reviews.

We’ve created a collection of high resolution, print-ready images for promoting the production of The Intergalactic Nemesis in your hometown.

The year is 1933. Are you ready for the adventure?

Everything cool these days seems to be coming out of Austin, Texas, and this show is the latest example. Telling an all-ages adventure story set in the 1930s, The Intergalactic Nemesis mashes up comic-book and radio-play formats into a one-of-a-kind theatrical experience, a new art form, the Live-Action Graphic Novel.

Three actors voice the dozens of characters, a Foley artist creates all the sound effects, and a pianist plays a cinematic score, while more than 1,250 individual full-color hi-res comic book panels tell a hilarious sci-fi adventure story visually from an enormous movie screen. And it’s all done live in front of your eyes.

The Intergalactic Nemesis has been featured on NPR, PBS, Conan O’Brien, the Wall Street Journal, and dozens of other outlets. The New York Post called its limited run on Broadway “Great fun! [A] happily retro multimedia extravaganza”, the Cleveland Examiner describes it as “pure theater magic,” and The Austinist recommends it as “totally nuts and a ton of fun… Do not miss it.” But don’t just leave it to the experts. See it for yourself.

If you’ve got an inner twelve-year-old (or an actual one living in your home) The Intergalactic Nemesis is one show you don’t want to miss.

For the kid in everyone!

The world tour of the cult favorite that’s played a limited run on Broadway and sold out the Kennedy Center is now coming to [YOUR VENUE].

Okay, so at [YOUR VENUE] we present the world’s most awesome concerts and screen some damn good movies. You know it. We know it. We’re all in this together, right?

So, what in crying hell are we doing presenting something called a “Live-Action Graphic Novel”?

It’s just the baddest-ass performance experience you’re gonna have all year–no, all decade–long. This show is like nothing else out there: three actors voicing dozens of characters; one Foley artist creating hundreds of sound effects; one keyboardist playing a score made up of thousands (yes, thousands!) of notes, all while more than 1,250 individual hand-drawn, full-color, kick-your-ass-and-blow-your-freakin’-mind comic-book images blast from the screen in sequence telling this hilarious period-adventure-sci-fi-romance LIVE! Yes, all the performers are in the room direct from Austin-friggin’-Texas.

So what are you doing? Click the link and get your tickets NOW!

“What evil lurks in the hearts of men…?”

No, it’s not The Shadow. It’s not The Lone Ranger. It’s not Little Orphan Annie or Flash Gordon or Buck Rogers(though it hearkens back to all of them). The Intergalactic Nemesis is an uproarious and nostalgic look back at the glory days of radio plays, but with a twist.

In addition to the tour-de-force voice work of a cast of three actors; in addition to the live sound effects performed before your very eyes; in addition to the live musical score on piano and organ; we add a visual spectacle. Over 1,250 individual, hand-drawn, full-color comic book images blown up to two stories high and projected on a screen the size of the proscenium. This incredible production will bring out the 12-year-old in you and leave you smiling for days.

When Pulitzer-winning reporter Molly Sloan and her intrepid assistant Timmy Mendez find a map of something called “The Central Hive”, they discover that they’ve stumbled upon the story of the century…

The year is 1933. Are you ready for the adventure?

When The Intergalactic Nemesis Live-Action Graphic Novel premiered, more than 2,100 people turned out. Shortly thereafter, it was featured on NPR and Conan O’Brien. Now, in its third touring season, the production has hit more than 80 venues around the US, UK, and Canada, including a run at the New Victory Theatre on Broadway. This one-of-a-kind all-ages show is not to be missed.

The premise is simple: a period adventure story (with no small share of laughs) featuring Pulitzer-winning reporter Molly Sloan, her intrepid assistant Timmy Mendez, and a mysterious librarian named Ben Wilcott as they face the most serious threat Earth has ever known: an impending invasion of sludge monsters from the planet Zygon.

The telling is what makes the experience of The Intergalactic Nemesis so incredibly unique: while three actors, one Foley artist, and one keyboardist perform all the voices, sound effects and music, more than 1,000 hand-drawn, full-color, hi-rez, blow-your-mind comic-book images blast from the screen, all performed LIVE.