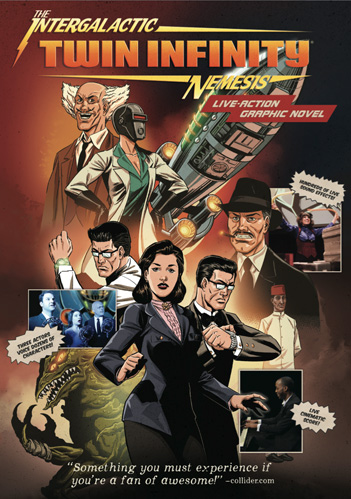 Scroll down for artwork, billing, short and long descriptions, web and brochure copy, press release copy, and quotes from reviews.

We’ve created a collection of high resolution, print-ready images for promoting the production of The Intergalactic Nemesis in your hometown.

The year is 1942. Are you ready for the adventure?

Straight from Austin, Texas, The Intergalactic Nemesis is a series of shows like no other. Its format is called a Live-Action Graphic Novel. Twin Infinity is its final chapter.

Three actors voice the dozens of characters, a Foley artist creates all the sound effects, and a pianist plays a cinematic score, while more than 1,250 individual full-color hi-res comic book panels tell a hilarious sci-fi adventure story visually from an enormous movie screen. And it’s all done live in front of your eyes.

Join Pulitzer-Prize-Winning reporter Molly Sloan and the man of her dreams, Ben Wilcott, as they race to rescue her fiance, also Ben Wilcott, from a secret society of spies that spans the globe—and beyond! Say what?!? Nevermind. Trust us. This show’s funny.

The critics have raved. Conan O’Brien has even performed in it. But don’t just leave it to the experts. See it for yourself.

If you’ve got an inner twelve-year-old (or an actual one living in your house) Twin Infinity is one show you don’t want to miss. The year is 1942. Are you ready for the adventure?

After eighteen years of project development, the final installment of The Intergalactic Nemesis trilogy is here.

The Intergalactic Nemesis got its start as a radio play conceived by Ray Colgan, directed by Jason Neulander, with sound effects by Buzz Moran. It was produced by Salvage Vanguard Theater and performed and recorded in Little City, a downtown Austin coffeehouse, in 1996.

Over the years, the project grew a following, added a score by Graham Reynolds, received a complete rewrite by Neulander and Chad Nichols, and was broadcast several times by NPR affiliate KUT-FM.

In 2010, Neulander added comic-art by Tim Doyle and projected it on a huge screen to build the visual spectacle. That new version, now entitled Target Earth, became the world’s first “Live-Action Graphic Novel.” It premiered at the Long Center to an audience of 2,100 people.

Since 2011, the first two installments of the trilogy have been booked in more than 100 venues around the world to audiences numbering in the tens of thousands. They’ve been featured everywhere, including NPR, late-night’s CONAN, The Wall Street Journal, and PBS, with rave reviews (“Great fun! [A] happily retro multi-media extravaganza!” –The New York Post; “Pure theatre magic!” –examiner.com).

Now, eighteen years after its genesis, the trilogy is complete.

Like the first two installments, it’s the telling that makes the live version of Twin Infinity so unique. While three actors voice all the characters, a Foley artist creates all the sound effects, and a keyboardist plays a cinematic score, more than 1,200 individual comic-book panels blast from a two-story-high screen to tell the story visually. And it’s all done live.

Like its predecessors, Twin Infinity will also be available in graphic novel and radio play formats both online and in print and CD.

Neulander has also expanded the Intergalactic universe to include a novel and audio podcast that features one of the secondary characters in Target Earth, Jean-Pierre Desperois. Fans can access this material through the company’s website and through Amazon and iTunes.

Audience members do not have to have seen the first two installments to pick up with the third. The story stands alone. No previous Intergalactic experience necessary.