By Jason Neulander on December 4, 2014 in Uncategorized 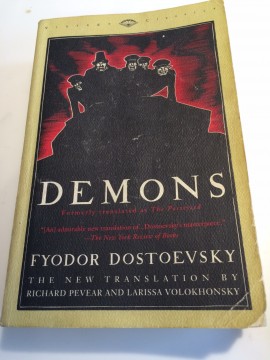 When I was a senior in high school I took AP World History. The teacher gave an assignment that was to be done completely independently. Read The Possessed by Fyodor Dostoevsky and write a 10-page paper on it based on one of five topics, which would be revealed two weeks before the paper was due. As I recall, this task was assigned in January and due in April or something. The paper would count for a huge potion of the final grade in the class.

Well, I’m a very fast reader and the book was a thick trade paperback. Nothing unsurmountable. So I completely blew off the assignment for weeks and weeks. It was never again brought up in class and I didn’t think about it at all. Then one day the teacher handed out the essay assignments. I figured I should probably crack the book, but I didn’t even look past the cover for another week.

About three days before the paper was due, I figured it was time to read the thing. I could usually read a book in a day if I put my mind to it so I opened it up. The print was tiny. The names of the characters were in another language (Russian, duh!). How many pages was this thing anyway? Holy shit. Seven hundred pages. Then I looked at the five possible paper topics. They were incomprehensible. There would be no way for me to BS my way to anything resembling a passing grade. I was totally up the creek.

I spent the next two days paralyzed. Finally, the day before the paper was due I went to the library and started digging through the card catalogue (yes, this was when there were card catalogues). I thought I remembered that you could search the card catalogue for topics by subject and I just started with the teacher’s first paper topic. It had to do with how Dostoevsky’s novel correlated to the Book of Revelations in the Bible. So I decided to look for the subject “Dostoevsky” in the hopes that I would see something having to do with religion.

My fingers ran through the cards in the little drawer. D. D. Donkeys. Here we go. Dostoevsky. Wait. What? “Dostoevsky, Revelations”? No way. I snagged the Dewey decimal number and ran into the stacks and found a book of essays about the works of Dostoevsky. One of the chapters was entitled something like “The Devils and Revelations”. I knew that The Possessed was sometimes translated as The Devils. Could it be possible that this essay might address one of the topics I needed to write about? Indeed, yes.

Somehow in the public library of the little town of Montvale, New Jersey, there was a book of essays about Dostoevsky. This would be remarkable in and of itself, but in that book of essays was a long chapter that directly answered the question posed by the teacher! I could not believe my luck!

In the interest of a good grade, I threw scruples to the wind. I sat down at my computer (an Apple Macintosh Plus) and copied the essay, changing big words for words I would more likely use myself. I typed as fast as I could. I couldn’t tell you what I was even typing about. I typed until I got to the tenth page of my paper, then wrote a conclusion paragraph that said something like “and that’s why The Possessed is like the Book of Revelations.”

The next day, convinced that the teacher must have read the same essay, meaning that I would get caught cheating, I handed in my paper.

Now, I’m pretty sure that many of the kids blew off the paper in a similar way to me. When the graded papers were handed back a week or two later, I could see a bunch of “C”s in red on the front page. But everyone knew that the girl who sat at the desk in front of me, Meg McDonald, had worked her ass of on this one. She had read the book. She had done the research. She spent weeks and weeks on her paper. And when she got it back, she got a “B-plus.”

The teacher handed me my paper face down. I braced myself for the “F” that would say I had cheated. I turned my paper over.

Did I do the right thing? Did I apologize to her? Did I give my paper back to the teacher and tell him I had plagiarized the whole thing? Did I announce to the class that Meg was the one who deserved the “A”, the only “A” paper in the class at all? No, I did not.

I’m in the Austin public library looking through the stacks for something to read. I wasn’t looking for anything in particular. I was letting my eyes wander over the spines. Something caught my eye. A thick black hardcover spine with six large letters spelling “DEMONS” and an author’s name. Fyodor Dostoevsky.

How likely was it that Dostoevsky wrote a book called DEMONS and also a book sometimes called The Devils?

I pulled the book from the shelf and looked at the cover. Under the title were the words “Formerly translated as The Possessed“. It was a brand-new translation that had only come out in the past month. Then and there I knew what book I was taking home from the library. I owed it to Meg McDonald. By God, I was going to redeem myself. I would be the only other kid in our AP World History class to read this book.

And boy and I glad I did! This book is AMAZING!

In DEMONS Dostoevsky takes a real-life murder by political activists of a Russian student mashes it up with certain details of the Book of Revelations and sets this apocalypse in a small rural Russian town. The Antichrist is represented by a character named Pyotr Verkhovensky. The character of the Beast is represented by a young man named Nicolai Stavrogin, one of the best, most enigmatic, characters in all of literature. The story builds to an explosive conclusion. It’s steeped in a fog not unlike some of the best Expressionist cinema–dark, mysterious, creepy. The book is not an easy read per se (quite a shift from my post about The Shining a couple of weeks ago), but the real surprise of it, at least for me when I first read it, was just how hilariously funny it was. The activists in the book, whom Dostoevsky is not shy about judging, are a bunch of clowns. So are the members of the aristocracy that they hope to overthrow. But the anarchists are led by–and the aristocrats are deceived by–a terrifying conniver, Pyotr, who also happens to be very funny and charming. Pyotr is convinced he won’t succeed in his nefarious plan (to do what exactly?) unless he enlists the help of Nicolai. And therein lies the rub.

I love this book so much that I’ve read it three times over the years. Moreover, it’s gotten me on a classics run that led me to reading all kinds of great books, from many by Dickens to Dumas to Stevenson and beyond.

One of the things I find fascinating about the book is how much it reveals about the Russian character. Dostoevsky had a real love-hate relationship with the West. He seems drawn to the appeal of European intellectualism of the time and recognizes the suffering of his own people under the rule of the Tsar. But he also despises the West, seeing its secularism as a direct threat to what he sees as the core of the true Russian, the Orthodox church. I think you can read this book in the context of today’s Russia and the actions of Putin and gain a real understanding of why things have unfolded the way they have over the past few years, going back over centuries, really, to when Peter the Great made the Russian aristocrats shave their beards and speak in French (something the aristocrats still do in DEMONS).

But also, I think you can read the book in the context of terrorism. You can understand why Dostoevsky was so afraid of these so-called anarchists. Look what happens when you let the clowns take over.

I highly recommend the Pevear and Volokhonsky translation of the book, which is the one I’ve read. Their introduction gives great historical context for the work if you don’t know much about the history of Russia.

Boy, writing this has gotten me so fired up that I think I’m gonna re-read it after I finish the book I’m reading now.