By Jason Neulander on November 25, 2014 in Uncategorized 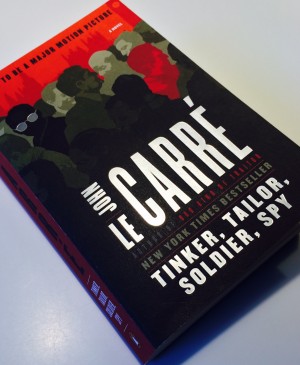 I had just finished reading the Blofeld trilogy of Bond books when I decided to read Tinker, Tailer, Soldier, Spy. I had seen the most recent film version, didn’t like it, but thought, heck, there’s got to be a reason that people keep returning to this material. I bet the book is really good. And, damn, it is.

Since then, I’ve read quite a bit of John Le Carré. And I’m just going to say this right at the top: I think he’s a literary genius. Not just a great teller of tales, but a great stylist as well (or at least he was while the cold war was still around).

How’s this for an opening sentence: “The truth is, if old Major Dover hadn’t dropped dead at Taunton races Jim would never have come to Thursgood’s at all.”

Who the heck is Major Dover? Who is this Jim? What’s Thursgood’s? Don’t tell me you don’t already want to keep reading!

One great example of his genius and influence is the use of the word “mole” to represent a double-agent within the offices of a spy agency. This is the first known use of that term. There are a bunch of other made-up jargony terms in the book that have found there way into contemporary language as well. Who else was able to do that? Well, Shakespeare. So, there, I’ve now compared Le Carré to Shakespeare.

One of the things I really love about this particular book is that while it purports to be a spy novel, it’s really about something else entirely, which is kind of what the movie totally missed. It’s about a man at the tail end of his career looking back and wondering what the heck was it all for, anyway. It’s about the sense of loss that inevitably happens at some point in middle age when you wonder if you’ve been squandering your time on this earth. It’s about betrayal, both personal and professional, which only adds to the sense of sadness that maybe life isn’t so full of purpose and meaning after all. Depressing stuff.

But where the new movie also completely missed was the fact that this book is both fun and funny. Le Carré is a great entertainer. George Smiley, the central character, is an unlikely hero. Short, overweight, continually needing to clean his glasses and using the end of his tie to do it (which I can attest is a great way to smudge your glasses even more). He’s soft spoken, but incredibly smart. He’s modest, but he’s the hero. Do you get this at all from Oldman’s performance? Nope. But it’s there in the book. And there’s a sense of optimism, too, in the character of Bill Roach, a boy who clearly has a bright future ahead of him. Maybe he (and his country) won’t make the same mistakes as his elders.

Because Le Carré is so great at getting into his hero’s head, Tinker, Tailer, Soldier, Spy becomes so much more than the whodunnit that it could be. Sure, there’s a parlor-mystery element to the storytelling, but in my reading that’s kind of the least of it. There is such an incredibly real sense of loss in this book. The events as they unfold are personal. This aspect of the book is magnified even more by the story that frames the main story, the coming-of-age of schoolboy Bill Roach, who is a stand-in for a young Le Carre in the way that Smiley is a stand-in for the older one. Turns out, maybe that the qualities it takes to be a great spy can also be applied to the art of writing.

From a more global perspective, it’s not just that someone has betrayed Great Britain, but that Britannia itself is crumbling. Its power is being rapidly ceded to the United States, its spy system is practically purposeless anyway.

Which brings me around to James Bond. Ian Fleming, like Le Carré, was a former spy who hit gold with his books. In the James Bond books, yes Britain is crumbling, but it’s not its own fault. No. It’s the fault of the shifty Orientals (Dr. No), the horrific Rastafarians (The Man With The Golden Gun), and the Nazis cum Jews (how this is exactly possible, I’m not sure) )(On Her Majesty’s Secret Service, You Only Live Twice, Thunderball). In Fleming’s view, England just needs a cocktail-drinking English super-spy to cut down these foreign forces and bring the Empire back to its former glory. Sure, England can partner with the US if necessary, but, really, aren’t the Americans really just Englishman with funny accents anyway? Don’t get me wrong, the Bond books are great fun, but they’re laced with a paternalistic racism and a little more than creepy when you realize that Fleming probably drank as much as Bond did himself (in one of the books Bond drinks 21 martinis in a single day–shaken not stirred) and kinda clearly saw James Bond as his more athletic alter ego.

But this is a far cry from the far more introspective and much better writing of Le Carré, where good and evil only exist in shades of gray (in fact, unlike Fleming, Le Carre pretty much completely debunks the idea of a British Empire being a force of good at all), and where spies are simply a literary substitute for the complex relationships we all have with each other.

By the way, the two followup novels that fill out the Karla trilogy–The Honourable Schoolboy and Smiley’s People–are as good if not better than TTSS. Read all three!