By Jason Neulander on April 22, 2015 in Uncategorized 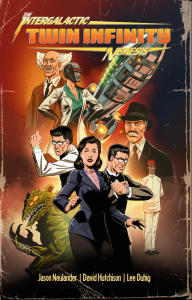 Well, the good news is that the Twin Infinity books are finally here! But, boy, has it been a long road to get to this point. For starters, the artwork for the book got way, way, way behind schedule. It was supposed to be finished about three months before we premiered the live version so that we had time to get the books printed and available for sale at the premiere. Unfortunately, said art got wrapped up the actual day we premiered the show. So we set up a pre-order system in the hopes that the books would be done by Christmas. If only!

The person responsible for lettering the book kept telling me that he was on top of it, but I never saw any pages. He swore that he had finished “about thirty”, which made me suspicious because he should have known exactly how many pages he had lettered. Anyway, I never saw any pages from him, so I guess I’ll never know. Christmas came and went as did New Years and I realized that I was never going to see the pages from this guy ever. Luckily, Ryan English, who had done some extra layouts for the artwork to help get the art finished in time to premiere the show, offered to help with the lettering. He jumped on it and finished all the lettering in about a month.

Then, we had a personnel shakeup in my office, so the person who was supposed to have gotten the artwork to the graphic designer to convert to PDFs never took care of that process. I realized this about two weeks later and got on top of it. Thankfully, we had a printer lined up, but they ended up finishing the job about 10 days after they said they would. The shipping took two days longer than I was told. But, finally, on April 16, nearly a year after the books were supposed to be ready, I finally got them!

I shipped them immediately most of the folks who pre-ordered them. And then one of the people who received the book discovered a major misprint! One of the pages had been printed twice and the page that was supposed to come after it wasn’t printed at all. He emailed me last night. The problem was my fault. I hadn’t proofed the final PDFs carefully enough. Between sending my original pages and the creation of the PDFs, the job got messed up. I freaked. My first thought was that we’d have to reprint ALL of the books, which would be totally horrible for me. Then it hit me that maybe we could just paste in the missing page. A lot of work, but way less money than a total reprint.

I contacted my friend Gerald Hanrihan over at Austin Digital Printing and he let me know that, in fact, there was sticker paper for just this purpose. As he pointed out, I wasn’t the first person ever to have this issue come up.

So, this morning I’m dropping Gerald a PDF of that page and hopefully will have the remaining books fixed and ready to ship by the end of next week.

Meanwhile, if you’ve received a flawed copy of the book, click on this link download and print it yourself: Twin_Infinity_print_correction_6.6×10. Or, if you want the sticker version of the missing page, shoot me an email and I’ll send it free of charge.

Book of the Week: Fingersmith