By Jason Neulander on December 12, 2014 in Uncategorized 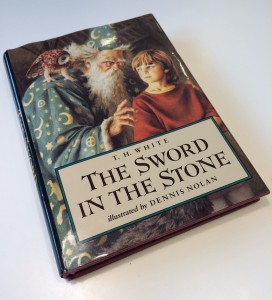 From a Russian master to one of the best YA novels ever written. But before we get there, thought it was worthwhile posting that I’m about 3000 words away from wrapping up SALT (at least a draft that I can share with a handful of critically-minded readers before I revise it again). Haven’t been this excited about a new project in quite some time. I’m having such a blast writing this podcast/book. Have never felt more in my element. And, for those of you reading this now who have been paying attention to that project, I promise that it totally delivers!

Onto the book of the week. The Sword in the Stone by T.H. White.

Let’s start with the fact that Disney completely botched this book as a movie. So if you’re thinking about seeing the movie version instead of reading the book (or you saw it and now have no interest in the book), skip the movie and get to this masterpiece.

I’ve read this book three times. Once when I was a kid, then again about seven years ago aloud to my older daughter, and then again just last month, again aloud, to my younger daughter. It is such a beautiful telling of the King Arthur legend, from the perspective of a young squire-to-be nicknamed Wart. It just so happens that Wart’s tutor is a guy named Merlin. The book is told in a series of episodes having to do with Wart’s education by Merlin alongside his friend Kay. Kay is the son of an English nobleman, Wart is an orphan adopted by said nobleman. But throughout the book you’re made keenly aware that when the boys grow up, Wart will serve Kay as his squire while Kay gets to become a knight.

What makes this book so completely great is its characters. Each character is so fully realized both in action and in voice and most of them (including Merlin) are pretty hilarious. Merlin himself is something of a bumbler. There’s one great scene in which the entire castle has gone on a hunt and Merlin, who lives backwards through time, is wearing running shorts. The shorts rip and he spends the rest of the hunt trying (and failing) to mend them through magic. In another scene, a character named King Pellinore jousts with Sir Grummore. Their armor is so heavy and their visors provide such a poor view that they mostly stumble around and bump into trees. My descriptions of these things are just terrible. In the book, they are laugh-out-loud funny.

In this last reading, Scarlett, my daughter, kept asking when we were going to see the sword in the stone, which doesn’t come until the very end. When we finally got there, both she and I were rapt. The way this part of the myth plays out in the book is just astounding. Tear jerking, really.

One side note: White wrote some followups to The Sword in the Stone, but they don’t have the perfect mix of wonder and humor of the original, so I can’t say that I really recommend them.

That said, (and I don’t use this word to describe much), The Sword in the Stone really is magic.