By Jason Neulander on May 11, 2013 in Uncategorized 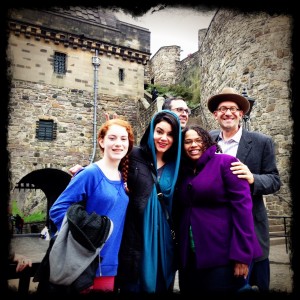 Edinburgh has been amazing. Possibly the prettiest city in the UK. And the reception to our show was nothing if not effusive. Just incredible. Huge thank-you to the Imaginate Festival for bringing us out here. We’ve had a blast!

We arrived after a crazy travel day that consisted of getting to the airport at 6 AM Eastern and arriving in Edinburgh at 7:30 AM Greenwich time the next day. Needless to say, we were exhausted. When we got to the apartments we were staying in, of course they weren’t ready, but the very nice manager Colin set us up with a crash pad, so Agustin and Piper went straight to sleep. Graham and I decided to wander around a scope out the city. Poor Agustin and Jessie had to load in that afternoon. Bleaugh!

Our apartments were perfect–two bedrooms and two baths. Even though Piper and I shared a bedroom, there was still plenty of room for everyone (we roomed with Graham). That first day was such a blur that I really can’t remember much of it. Suffice it to say that by the time we went to bed, we were exhausted.

The next morning had us in tech, with a performance that afternoon at 2 PM. The show was a little rough–Graham and Buzz were still getting used to being back in it after a long hiatus. The rest of the group was getting used to Graham and Buzz. So I decided to take notes on that show and the next day’s. But by the end of our second performance on Wednesday, things were really humming. The Herald reviewed the show and called it: 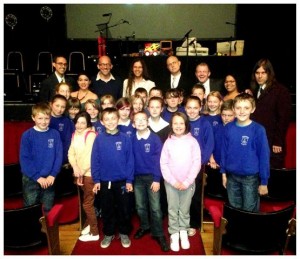 Destroying the minds of the Scots

I figured out a way to get our student audiences a little more into the show, too. I let them know that if they wanted they could laugh, cheer, and applaud, contrary to what their teachers probably told them. The kids did just that and the performers loved it. A major Australian venue representative told me the show was “brilliant” after one of these student shows. I have to credit those amazing kids for being so darn loud!

Meantime, after the student shows this Tuesday, Wednesday, and Thursday, we were able to be sightseers. We got a tour of Edinburgh Castle, we ate at the Witchery, we went to the National Museum of Scotland, Graham and I sampled a LOT of Scots Whisky and bought some to take home, and we walked through this incredibly beautiful walking city. Piper told me at least five times that she wanted to move here. The fact that the weather was mostly sunny didn’t hurt one bit. 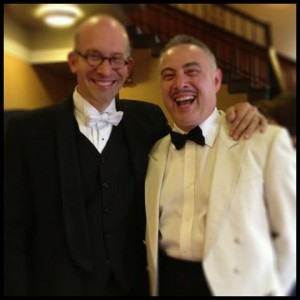 Last night was our official UK premiere. The folks at the Imaginate Festival decided to make a big deal out of it, literally rolling out a red carpet and encouraging the audience to dress up. It was a total party. The energy was through the roof and the audience response at the end of the show was like a rock concert.

We’ve got two more performances today, then we’re done in Edinburgh. The team and I are renting a car tomorrow to drive through the Scottish Highlands a little, then on a plane Monday to Washington DC where we play the Kennedy Center.

One Response to Across the Pond