By Jason Neulander on April 2, 2013 in Uncategorized

Wow. The last couple of months have been a total whirlwind. From coming back from Hawaii and immediately going into rehearsals to record the radio version of Book Three: Twin Infinity to going back on the road in Ohio, Colorado, Canada, and Upstate New York, to being defrauded of thousands of dollars on the day we were scheduled to arrive in New York City (more on that below), it’s been one thing after another. But we’re here! In New York! About to make our Broadway debut.

Wait. I need to say that again to wrap my head around it. About to make our Broadway debut! Whoa! 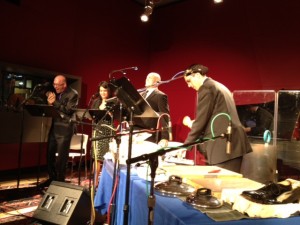 The recording of Twin Infinity went incredibly well. The amazing folks of KUT-FM opened up their brand-new Studio 1-A to us for a full day. Thanks to the incredible support of the folks who pledged on our Kickstarter campaign, we were able to make this happen. We had a capacity crowd for the recording and it was unbelievably fun! The final mix should be ready soon-ish and I’ll post when it is. Thanks to everyone who supported us and to KUT for the use of the space and to Cliff Hargrove for engineering the recording. You all rock!

Our shows since Hawaii really all went incredibly well. The best news is that every venue this year has committed to bringing us back either next year or the year after. I’ll post our tour dates for next season soon, but, meantime, huge shout-out to the folks who programmed us into their seasons and the thousands and thousands of people who have come out to see us so far this year. Amazing!

Four days ago, I flew to Schenectady to meet up with the team to make the final journey to New York City. It was an ominous start. My flight was delayed and I literally landed, grabbed my bags, got in the van, changed shirts in the Proctors parking lot, and ran on stage to do the curtain speech. The show went great and the audience was awesome, but afterwards we went back to the hotel to discover that a water main had broken and there was no running water in the hotel. No showers. No toilets. Yeah.

We all took it in stride, and even joked that it’s always darkest before the dawn. After all, we were about to be in New York City for our Broadway debut! Jessie had found the most amazing apartment to house all of us. Everything was going to be fine.

Little did we know…

On Monday morning, after not hearing from the NYC apartment manager over Easter weekend, we still hadn’t heard from them. We tried calling the number listed and got stuck on infinite hold. We checked the website, but it wasn’t there anymore. Instead it said “Bad Vacation”. We emailed our contact to say that we were going to put a stop on the wire if he didn’t get us check-in information. He emailed back with an address for the apartment, but no other information. No phone number. No time to meet someone. Nothing. And I had wired him $5600 to secure the apartment on Thursday.

The whole thing looked completely legitimate. We found them through HomeAway. They had a very legit looking website. They emailed us with apartment options with ground plans and photos. Then they sent us the wiring instructions. Done, right? Wrong.

You hear about it. You think that only a fool would get caught up in that. But then it happens to you and you realize just how gullible and trusting you really are.

We spent the entire day yesterday dealing with this, even as we were driving to New York City. Jessie Douglas and I both were on the phone and email and social media looking for a solution. We ultimately found housing thanks to suggestions from the New Victory Theatre, Elizabeth Helke at Temporary Apartments, and the help of the hundreds of people who spread the word that we were in need.

It’s extremely unlikely we’ll get our money back. I’m still dealing with that now. But everyone is safe and housed and we open on Broadway on Friday! Schedule and tickets HERE.

Some wonderful news today: Mario Troncoso of KLRU in Austin just posted this incredible trailer for a 30-minute documentary on the project that will broadcast on April 25. Watch and enjoy!

The Intergalactic Nemesis Trailer I Arts In Context from KLRU-TV on Vimeo.

Hawaii Tour 2013
Back on Broadway next year

One Response to If we can make it here…