By Jason Neulander on September 4, 2014 in Uncategorized

18 years in the making and it’s about to be over.

Well, not over exactly, because it’s going to tour the world, come out in print, be available as an audio drama, roll out on comiXology, and become serialized through a KLRU/PBS Digital Studios YouTube series. But the heavy lifting is over.

Tomorrow night, the Live-Action Graphic Novel version of Twin Infinity receives its world premiere at the Long Center. And the Intergalactic Nemesis trilogy will be complete. Tickets HERE.

I have been so incredibly lucky to work with some of the most talented and friendliest people on this project over the years. In particular, in the past five years, since launching the Live-Action Graphic Novel format, the folks I’ve worked with have been tireless collaborators and uplifting spirits, even at times when things were feeling like they were going nowhere.

For starters, thanks a ton to Julia Edwards, Lisa D’Amour, and Jessica Reisman for taking a chance back in 1996 by writing those quick-and-dirty episodes for our Little City recordings. This project wouldn’t exist without you.

I need to shout out to the artists who made the comic-books come to life: Tim Doyle, Paul Hanley, David Hutchison, and Lee Duhig. Without you guys, the “Live-Action Graphic Novel” format would all still just be a concept in my head.

Huge thanks to Cliff Redd, former Executive Director of the Long Center, who invited me to bring the radio plays to his hall and in whose office I came up with the concept for what became the Live-Action Graphic Novel. And huge shout out to the current team at the Long Center for carrying on this project, in particular David Wyatt, who came up with the words “Live-Action Graphic Novel” and who has been a tireless cheerleader for the past five years.

The Intergalactic Nemesis would have stalled out if it weren’t for my investors. Can’t say thanks enough to them: Marc Seriff, Scott Reichardt, and Cord Shiflet.

The recent digital expansion of the project would simply not have been possible without the back-office support of Mission Control at the Robot Planet in the form of Rachel Kelmenson.

Our continued touring wouldn’t be happening either, if it weren’t for the incredible team at David Lieberman/Artists’ Representatives. Huge thanks to all of them, and particularly Allen Moon and Mr. Lieberman himself.

We probably never would have continued this project for so long without the continual support from KUT-FM, which broadcast every version of the radio play since 1997. In particular, thanks to Mike Lee, Hawk Mendenhall, and Rebecca McInroy.

The future of the project would be extremely uncertain if it weren’t for the vision of the folks at KLRU, in particular Eve Tarlo and Sara Robertson.

And now we’re down to the big guns. I get to work with my very best friends. These guys have made me a better artist and a better person. Buzz Moran, sound-effects genius, thank God Tony flaked out all those years ago! Graham Reynolds, it goes beyond music to having a peer who is just so damn smart and sensible. Chad Nichols, my co-author on all three of these shows, you make me a better writer by calling me on my bullshit.

Finally, the two people without whom this project wouldn’t exist and even if it did, it would have gone nowhere. Ray Colgan, thanks for suggesting we create a sci-fi radio play to be performed and recorded at Little City all those years ago. And thanks for being an essential part of the team in so many ways today. And Jessie Douglas, I don’t know what I’d do without you. So lucky that our paths crossed. You completely rock.

Okay. Break legs, everyone! Can’t friggin wait for the show! 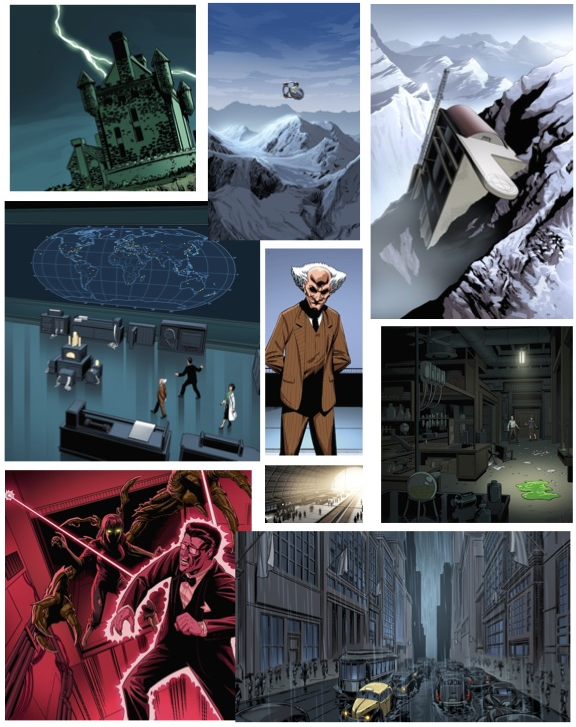 Look, ma! We got a billboard!
October update