By Jason Neulander on June 18, 2012 in Uncategorized 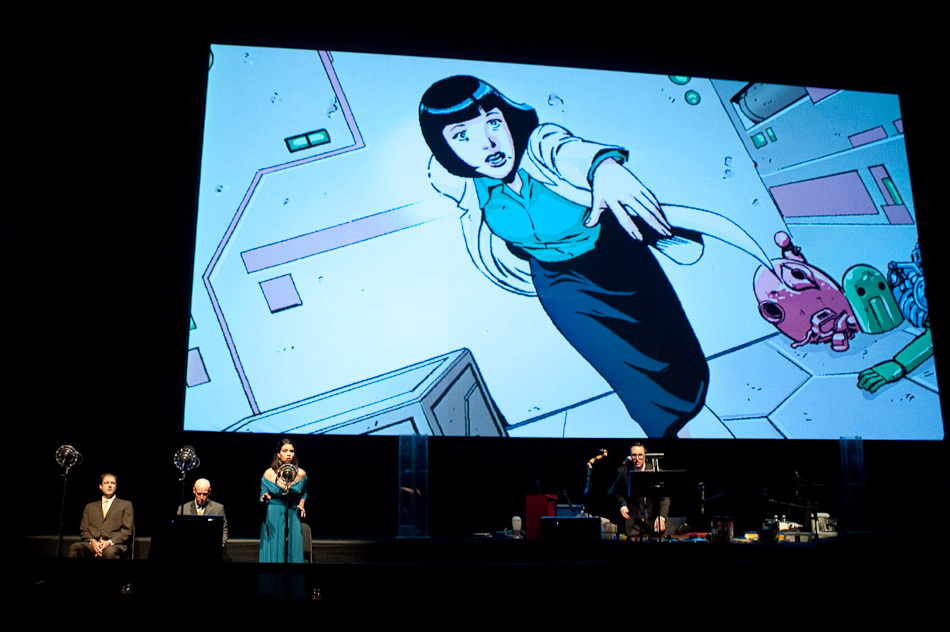 What a night! The world premiere of The Intergalactic Nemesis – Book Two: Robot Planet Rising on Friday, June 8, was like a huge homecoming for us. In fact, the Austinist even said as much, comparing us to “Elvis coming back to play Tupelo in 1956 or Marvin Gaye selling out his hometown’s Kennedy Center in ’72.” Wow!

We had about 1,600 people in attendance that night and I have to say, they were a fantastic crowd. My two favorite moments in the performance were when the audience let out a loud cheer when the title came up in the opening credits and when they let out another loud cheer at the re-appearance of… (well, that would be a spoiler, so I can’t say it!). If ever I wondered whether people connected to the characters and story, my questions were answered on the 8th.

A big part of the fun for me was the pre-show ice cream social, hosted by CultureMap Austin. Amy’s Ice Cream was there to serve up the “Intergalactic Nemesis Combo” (a delicious concoction of chocolate ice cream, fudge, M&Ms, and Kit Kat). I got to meet several dozen fans and overheard someone say about me “he looks so normal!” Ha ha! I wonder what they thought I looked like. I probably wish I actually looked like that!

We got incredible reviews and great feature coverage, too, from CultureMap Austin, the Wall Street Journal, Ain’t It Cool News (see below), the Austinist, the Austin Post and a whole bunch more. Some of my favorite quotes:

CultureMap Austin said Robot Planet Rising “will make you want to high five your neighbor in anticipation of the next installment.”

The Austin Post had this to say: “I felt like the nerdy little 10-year-old kid that I once was, bouncing off the walls and grinning as I talked to my friend about my favorite parts.”

We ended up signing books for an hour after the performance (longer than either of the acts). After, the folks at the High Ball hosted a party for us with specialty drinks that included Zygonian Slime and 40-weight. And after that, me, Graham, Cami, Agustin, Jessie, and Danu went out to 24 for dinner. I got home at 4:30, which is the latest I’ve stayed out since the 90s!!

So glad to know that people liked the show! If you were there, thanks so much for coming out. I’m serious when I say that I’m grateful to each and every person who comes. It’s amazing to me that so many of you groove on my little comic-book/radio-play experiment. Thanks!

One Response to Book Two world premiere – a hit!