By Jason Neulander on May 7, 2012 in Uncategorized 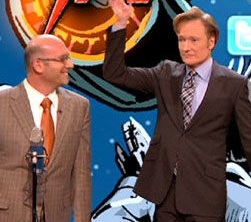 Jason Neulander with Conan on Conan

The flight from Park City to Los Angeles was uneventful, other than the fact that Danu, Jessie, and I were through the moon with excitement. All along, the whole Conan thing seemed completely unreal, yet here we were on a plane to L.A., paid for by Conan’s show and with the exclusive purpose of having us as guests on the program. The plan was as follows: we’d land in LA, get our rental car, check into the hotel, then shortly thereafter get car service to the Warner Bros. studio for a tech rehearsal that afternoon.

Our hotel was the Sheraton Universal, which, to my tastes, was even nicer than the hotel in Park City. Classic Modernist architecture. Tastefully decorated rooms. Impeccable service. Paid for by Conan!

The night before I had a crazy dream in which I was watching myself at the foot of my bed at home. My wife pulled out a gun and shot me through the mouth, after which I died. The reason: I couldn’t survive to the Conan appearance, but my face needed to be preserved for TV. Yeah, that’s how my mind was working. The stakes were that high. The fact of the matter was that I literally could not believe that this was really happening. I was absolutely certain that disaster would strike before we made it on the show. I think this had a lot to do with the fact that in my final years at Salvage Vanguard Theater (the company in Austin I founded and ran for a decade and a half) were fraught with challenges and every time it seemed like all the hard work would pay off, something would happen that would make the effort fail. My two final years at SVT felt this way and the year after I left was more of the same (economy tanking, out of work, etc.). So the idea that I would actually survive to be on Conan was beyond my comprehension.

We were picked up in a black SUV and zoomed to the Warner lot. Conan’s studio was set up inside one of the warehouse-like sound stages on the property. Inside the sound-stage they had build out their offices, prop shop, green room, dressing room, makeup room, wardrobe, reception area, and the TV studio itself. It was like a little city inside this building. 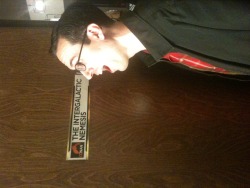 Our own dressing room!

Our situation was really unusual because it’s extremely rare for the producers at Conan to give a guest spot so much technical preparation. But our appearance required a use of greenscreen that they had never done before, so they wanted to make sure that there was enough time to get it all together. And because of the fact that we were having this extra day-before rehearsal, we were entirely in the way. The guests on that day’s show were using all the dressing rooms. There were people taking up the green room. There was literally nowhere for us to hang out without being in someone’s path. My anxiety level was shooting through the roof. When we finally got called in for our rehearsal, it became clear that the director had not looked at any of our video and didn’t know what our show was. Conan was nowhere to be seen. It was just me, Danu, Jessie running the slides, and the whole Conan production team. We were heavily outnumbered and they clearly didn’t want to be there for this extra work. In retrospect I completely understand this–they have to do a new show every single day. But at the time, this fact only made my blood pressure go up. Fact is, by the end of our rehearsal I was a total nervous wreck.

That night I had another dream. In it, we were the guests on a nationally televised talk show. When we went into the studio for our appearance, the host didn’t know who we were. I told him that we had rehearsed the day before, but he was hearing none of it. Our appearance was cancelled. 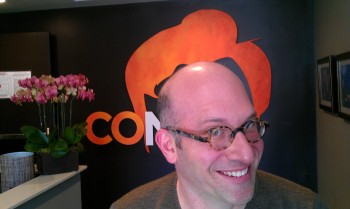 The car service arrived at 9:45 to take us to the studio and we were just on time at 10 AM. The morning had been set up exclusively for our tech rehearsal. We were shown to our dressing rooms (yes, we had dressing rooms!), we were given breakfast, the offered to shine my shoes and press my suit, we were treated like royalty. Today was our day and now we belonged.

Even better, I was happily surprised to discover that the director had given our appearance a lot of thought overnight and was ready to make it look great. I had decided the night before that I would let one of their interns stand in for me for the rehearsal so I could just watch. I sat next to J.P. Buck, the segment producer, on the stage where Conan’s desk was and came to the full realization that this really was happening. Buzz somehow managed to catch this moment on camera–me standing next to Conan’s desk, looking around the studio, with a genuine smile on my face. We had arrived. 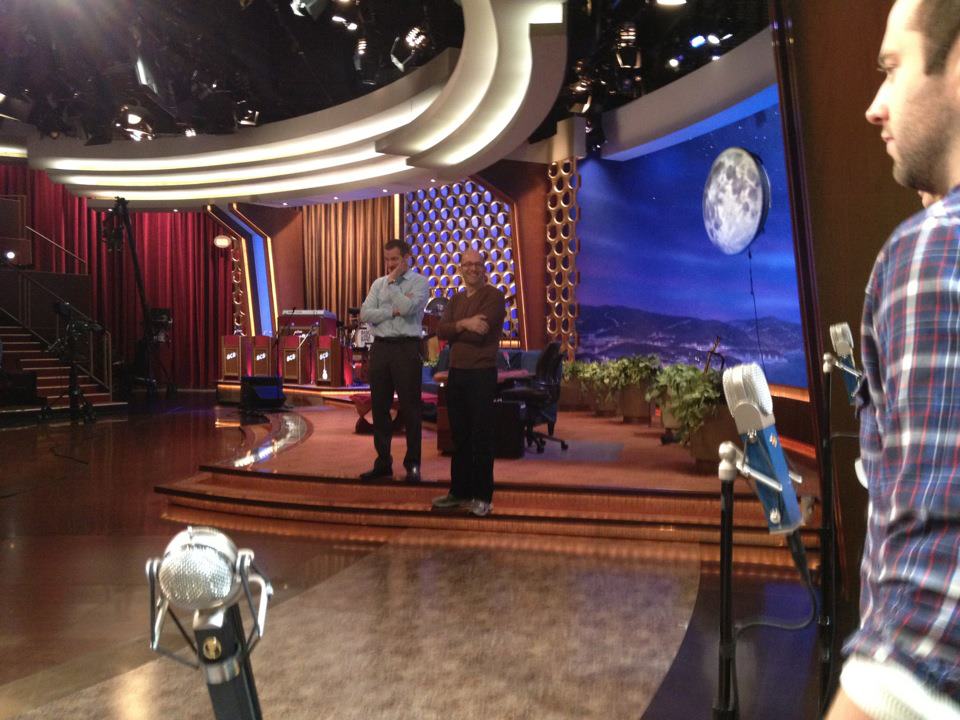 Jason watches the tech rehearsal from the CONAN stage

After our rehearsal we had a couple of hours to kill, so me, Buzz, and Graham wandered the lot. We went to fake New York and fake Chicago. We walked inside a couple of the fake buildings. We wandered an outdoor set. We watched a little tour bus drive by. It was the coolest! 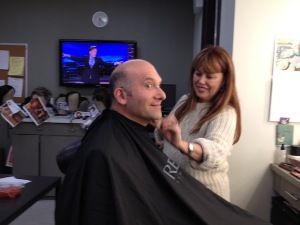 Jason in the makeup chair; Conan on TV.

We were back at the studio at 1 PM and J.P. told us that our next rehearsal would start in about an hour. They wanted us in costume for the rehearsal so they could adjust lights. So Buzz and I decided it was time for hair and makeup. We walked into that room and I jokingly said I needed to have my hair done. Amazingly they took me seriously and trimmed up my buzz cut!

Suddenly out of nowhere we were called to the stage and who is there to greet us but Andy Richter and Conan O’Brien himself! Both of them are tall. Conan is really tall! He flirted with Danu and Jessie, chatted with me, Graham, and Buzz. We raced through the scene and then Conan stepped away from the group, saying to the room and to no one in particular: “Now’s the fun part. I get to figure out what to cut.” Then he looked me in the eye, pointed his finger at me, and said, “Not you.” Holy mackerel! Forget the predictive power of dreams! We were in!

John Bauman (my manager) and Doug Edley (my agent) joined us in the green room for the taping. My old pal Lisa Loeb was there too. We watched the Reese Witherspoon interview and laughed. We watched part of the RZA interview and then were ushered backstage for places. And then we were on stage.

The performance was a total blur for me. Watching it on YouTube it’s hard to believe that it even happened. Yet the video is real. That’s really me and my team. Thousands have watch the video since it was posted. Yeah. I was on Conan.