By Jason Neulander on April 24, 2012 in Uncategorized

Finally, after weeks and weeks of dealing with a hacked website and then going on vacation, I’m back to the blog. And to catch up, I need to head all the way back to February and our week of living like rock stars. 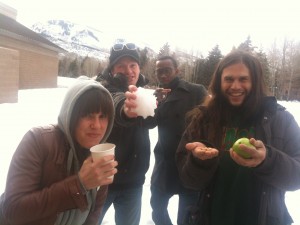 On February 9, Cami Alys and I flew from Austin to Park City UT for a gig at the Eccles Center, the flagship venue for the Sundance Film Festival. I had arranged for the presenters to take care of our ground transportation (car service to and from the airport and around town while we were there) and hotel rooms. At their insistence, they added in free lift tickets for the whole company! Anyway, Cami and I were scheduled to hold a Foley workshop for the kids in the high school there on Friday the 10th, so we flew out a day early from the group.

When we landed in Park City, Jenny, our amazing venue contact, picked us up and drove us to the hotel. And what a hotel! Right at the base of one of the ski mountains! Each room had its own kitchen, dining room, and fireplace! We were living in the true lap of luxury. Cami and I had dinner at one of the restaurants at the resort, which was delicious though more than Cami’s per diem so I treated her. 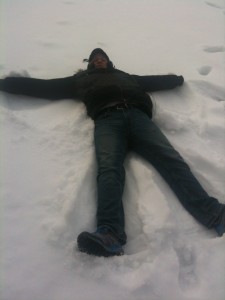 The next day we did our workshop which went over great and the rest of the team arrived. I was already getting a headache due to the altitude and the next morning was completely delirious. But my 12-year-old daughter had just learned that water is the most efficient way to get oxygen to the muscles so I drank tons and tons of water. Still, the altitude kind of got to everyone. I was worried that one of the actors might just collapse on stage or something during the show, but thankfully that didn’t happen.

The crew at the Eccles was outstanding and everything went super-smoothly. About 400 people came out, which in a small city like Park City, was pretty amazing to me. More amazingly was the fact that a few people had driven from more than 2 hours away because they heard about the show on NPR!!

After the show we went to a party thrown by the folks at the Eccles Center and I had a great conversation with the guy who I found out had sponsored our appearance. He was hilarious–dressed in a 1930s dinner jacket and just a huge fan of what we had done. I also spoke with another board member who invited me to go skiing with him the next day. I asked him if he was really serious because I might actually take advantage of the offer. He was and I did! Finally, I had a great chat with Teri Orr, the amazingly inventive Executive Director who found our show and brought us out. She and her team were incredible hosts and I really do hope we have the chance to bring the sequel out to them next season!

The whole cast had voted to stay an extra day to take advantage of the ski passes, so the next day we all went out. I was the only one with actual skiing experience, so it was really fun to hear about everyone’s efforts, particularly from Kenny, whose birthday it was! Poor Kenny had a miserable time trying to snowboard, but afterwards we were chatting in his room and he realized that, holy mackerel, he had gone skiing for the first time!

That night I cooked a bolognese sauce for the whole team and we ate a huge pasta dinner in one of our extremely fancy hotel rooms. The next day we split up with half of the group heading back to Austin and the other half off to Los Angeles for our appearance on CONAN! 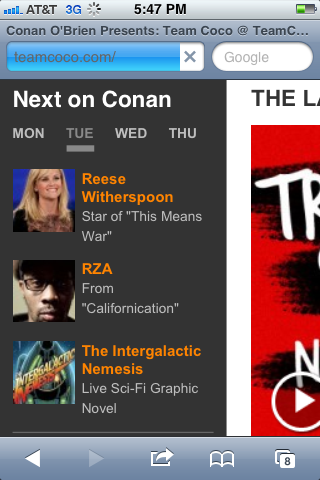