By Jason Neulander on August 31, 2012 in Uncategorized 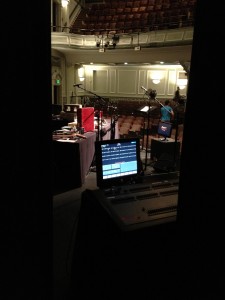 Wednesday, August 29, was everything we could have asked for and more.

My expectations were fairly low going into this show. Not because the folks at the venue were anything less than awesome to work with, but because whenever we go onto a college campus there’s the worry that the kids there won’t turn out for a show that they most likely have never heard of. I never should have worried.

The day started early because we had to get the show loaded-in in time for me to give a speech at 1 PM. I was pretty nervous about the speech, truth be told, because while I’ve spoken in public many times, I’ve never spoken to a student crowd before and I was afraid that my topic might not be of interest. I had decided to do the talk on my final couple of years at Salvage Vanguard Theater, the year that followed, and the launch of the Live-Action Graphic Novel version of Nemesis. Those were particularly challenging years for me–the toughest of my adult life–and I hoped to draw some conclusions that might help the students learn from my example and not make the same mistakes I made.

The speech went well, we had a much bigger turnout than I hoped, and a couple people told me after that they really liked it. One person in particular said something that meant a lot to me–he told me that it was refreshing to hear someone talk so openly about the challenges they faced. That was nice to hear because that was definitely the point for me of giving the talk.

The show that night, though, blew all our expectations away. While it wasn’t completely sold out, the house felt nice and full, but the energy of the crowd could have filled three theatres. They were amazing! From the moment the cast came on the stage they got completely caught up in what we were trying to do. It was the first show ever where Timmy’s line “The globe is a sphere, it doesn’t have any corners.” not only got a huge laugh but actually stopped the show with audience applause! There was a serious feeding frenzy at the merchandise table and we spent about a hour after the performance signing people’s stuff.

It was so much fun to get to meet the incredible students of Earlham College and if all goes well, we’ll be back in future years with the sequels!

Thanks so much for a great tour kick-off, Richmond, Indiana! Next stops: Wellington TX and Manhattan and Lawrence KS, Sept. 19-22. Complete tour schedule HERE.